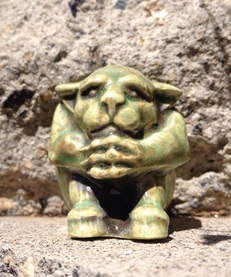 Bells no long rang at Dornach Cathedral, the sound of hymns and litanies had not been heard since the night of fire and death, when the Murrays and the Mackays had fought, and bled, and died on its stone floor. What had been shaded by the lead roof, now lay open to the weeping sky, and the graceful piscina, a stone basin that had held holy water for time out of mind, now held only slime and moss, and decaying leaves. Bramble grew between the paving stones, patiently pushing them awry, and insects made their homes in the recesses where once holy statues stood.
A faint tinkle of bells, and the sound of sheep, carried to the gargoyle who sat in his niche in what was left of the crumbling facade. Though the choking smoke from that terrible night had darkened his face and his crossed paws, the moss growing in his soft stone skin had covered and consumed all of it, finding sustenance in the ash, growing green life from the darkness of death. He gazed down toward the meadows, the same meadows he had watched for hundreds of years. He remembered when the people were summoned by the bells, and passing inside the great wooden Cathedral doors, had glanced at him in dread and wonder. Now, only this shepherd child came, to play and sleep and sometimes to cry.
The shepherd child, a little girl of perhaps seven years, carried a stick and a small cloth sack. Her tiny herd of sheep, creatures of routine, settled immediately to grazing in the spongy green meadow, and she walked to her favorite spot, where she had worn a faint path and a little clean hollow in the blown leaves that lay heaped on the altar steps. The spot just fit her tiny body, and she settled into it as into her mothers lap. Carefully placing her small cloth bag in a little cave formed by a missing stone, she pulled her woolen arisaidh closer to her feet, the cloak serving as a blanket both now and in her bed at home.
She spoke to herself as she played out scenes in her mind, while her eyes watched the sheep. Sometimes she spoke like her father, in a deep and ragged voice, and sometimes she imitated her mother, whose high, soft tones had become shrill and demanding lately. The child, in the safety of the old Cathedral, alone but for the sheep, tried in her playing to change the reality that she faced at home, making her mother happier, making her father calmer, and making her brother live again.
If only the clans had not feuded. If only her brother had not disappeared that night, walking away from her through the crooked door of their little home. She played out each scene to comfort herself, but it lasted only as long as the sheep were in the meadow, and she was here in the embrace of the empty altar, where only the gargoyle heard her, and was silent, letting her have her peace. He had seen powerful men, men who moved mountains, whose voices lifted their congregations to great heights and frightened them with scent of sulfur and demons, but he had come to love this child, who brought in her fragile hands a few flowers, a small crust of bread, and hope.
Story and photo  by Joanie Berkwitz.