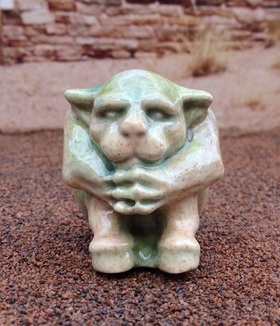 Along the dusty walkway, carved from sandstone, a row of gargoyles gazed at each other in frozen arrogance. Quiet, dark, simple people went about their daily routines, carrying loads on their heads, or on platforms slung between two men, in the scorching summer sun. Their footsteps stirred the ever present dust into tiny puffs, that slowly settled back to the surface, only to be stirred again. Dust was everywhere, blown from the great arid expanse all around them, the shifting, fickle, overwhelming desert that dictated every aspect of the people's lives, from their clothes to their burials, to their vision of the Afterlife.

Craftsmen had carved the gargoyles long ago, in the shapes of reclining lions, with the headdress of the Upper and Lower Kingdoms. Caressed and lashed by the ever present wind, scoured by the sand dislodged from their neighbors and from the stepped Pyramid whose shadow fell across them once each day, the graceful lions had gently fallen into a state of disrepair and disgrace. The prosperous Royal Family who had ordered them carved, had long ago gone to their eternal rest in the darkness of the Pyramid, gradually turning to stone and leather themselves, unreached and unguided by the Gods that they had hoped to join.
Once, a wandering couple, a young boy and girl, with eyes only for each other, had carved their names in the soft graininess of the walkway gargoyles. The shapes that they carved, the phonetic spelling of their given names, slowly disappeared as the couple joined their lives, had and lost children, and finally were taken by old age as well, laid with a mummified cat and a small feast of beer and bread, all that their children could spare.
Unblinking, the gargoyles watched as the Sun Chariot rose and disappeared, rose and disappeared, and the distant city by the river grew, and slowly fell into dust itself. The gargoyles also diminished, unprotected and uncared for, and finally they were broken away from their bases, and carved into smaller paving stones, and nothing was left of them, not even a ghost to whisper its sorrow in the corners of the Valley of the Kings.