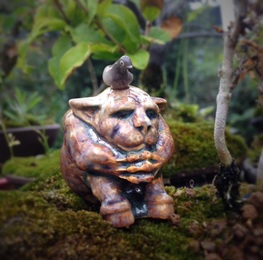 Guano
He remembered when the City was small, when his spire was the tallest point for as far as he could see. He remembered the year that lightning struck it, blinding and explosive, and when the bombs fell from the sky, pocking his view with craters and debris. He remembered the plague years, when people danced their fears in processionals that stank of death and horror, and the mass graves that mocked the dignity of those whose bodies were tipped carelessly in, and covered in dirt and shame and rejection. The fortunes of the City ebbed and flowed beneath his crouching knees, prosperity and construction followed by decay and fires and war. His tranquil, unblinking observation of the City had taught him a great deal about humanity, but almost nothing about humans.

The lives below him were fleeting, fragile, cowed by weather, bullied by starvation, and yet on a Spring day, the children capered and the lovers strolled, the scent of flowers and the sounds of music drifted even as high as his niche. He loved music, one of the few human activities that he could relate to. He loved the deep tones of the marches, the sprightly waltz, the sweetness of a lullaby sung by a mother to her fussing child. He could have given an account of the history of local music, for at least five hundred years, but there would be no names, no dates, nothing but the shape of the sounds as they drifted past him and lighted briefly on his stone skin. It was on a day of music and sunshine that the Pigeon had appeared.
While human lives seemed ephemeral, they were substantial compared to birds. Cooing flocks had mindlessly inhabited the eaves and coves of his roof for almost as long as he had. He remembered the dovecots, dotted with holes, each a tiny entrance to a nest. In a more innocent time, doves had been common sustenance for the people, and other birds were discouraged. Now the doves had given way to pigeons, who were more aggressive and determined, and blue grey replaced soft brown grey on roofs all over the City. It had taken a while for him to notice this particular pigeon, and that it had landed on his head.

Listening to the music below, watching the streaming ribbons and the colorful, martial clothing of the musicians, he slowly became aware of his companion, who even now was undistinguished from its many cousins. It sat solemnly, quietly, almost comfortingly as they listened and watched together, remote from the scene below and yet actively a part of it, moved by it. The almost weightless pigeon, a creature of wind and sky, and the heavy stone gargoyle, a creature of the mountain's heart, sharing a sort of unspoken friendship for a little while, simple and pure. A pigeon's life is short, a gargoyle's existence is almost inconceivably long, and they had nothing in common but a piece of sky, a caressing breeze, and the enjoyment of the music. It was enough.