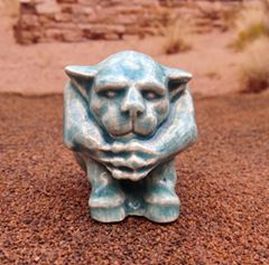 Komainu's Story
In the spreading roots of an ancient tree, sat a Monk, his saffron robe very slightly moving with each of his slow breaths. Since sunrise, the Monk had been there, motionless, silent, in kinship with the stone gargoyle whose lion face and open, grimacing mouth guarded the small altar nearby. Monk, and gargoyle, and tree... and nothing moved, save the very tips of the tree's branches, harsh and bare against the winter sky.
Inside the walls of the Monastery, hidden from all but a few human eyes, the gargoyle had watched as the processions of bare footed Monks paced the seasons, as the Sun had paced the sky. Hundreds of years had piled up like the dust of the incense inside of the altar niche, as layer by layer the trunk of the tree thickened, and its roots spread and rose above the moss, and its limbs reached toward the sky in an imperceptible, implacable yearning. Once, before the walls, before the Monks, the tree had been worshiped by the simple people who lived nearby, as a Spirit to be praised and prayed to. After the Monks came, and built the walls, and erected the altar, the tree was still worshiped, and tended, and considered in meditation. Now the Monk sat below in its roots, silent and still, and the evening light began to fail.
Tiny sounds from the frogs, and the insects, and all of the creatures that relished the dark, began to fill the cold air, and the Monk's breath became visible as the tiniest frost, dancing under his nose. Without warning, the sky above the tree seemed to explode in silent light, streaking across the sky and casting fast moving shadows on the Monk from the tree branches. He looked up, his eyes vacant like a man awakened at the peak of a dream, and looked past the gargoyle to the afterimage of the meteor seared into his retinas. Never had his meditation been interrupted by a Sky Dragon, and as his eyes slowly became accustomed to the darkness again, they were filled with tears. He had his answer.