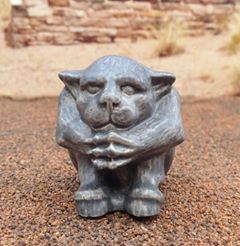 Leaves, soft green and new, trailed from the beams overhead, and held the promise of sweet, dusty grapes to come. Gentle thuds from bare feet, together in rhythm with chanting and the swinging of incense, could be sensed from the chapel across the patio. The chanting rose and fell silent, leaving only birds to fill between the echoes with their song. In the brick paved lavanderia, quiet people washed their rough linens with soap made of tallow. Siphoned from the San Luis Rey River, the water flowed through the gargoyles mouth, always open as if in surprise. He was chiseled from granite, from the bedrock of the surrounding hills, and the inexpert hands that formed him had never seen his glorious predecessors, high on the cathedral spires of the Old World. Instead, the carver's chisel was guided by stories told to him by Father Lasuen, and the gargoyle was a childlike rendering that, nevertheless, preformed his function as a conduit for water flawlessly.

Reflected in the tiny arcs of hundreds of soap bubbles, the gargoyle felt the warmth of the Sun, and heard the quick thump that always began the loud chiming of the Mission bells. In the fields below, hazy with shimmer and dust, people began slowly walking back along the bare trails that their feet had worn in the hillsides. Dressed simply, unhurried, serene, the people and the Friars seemed timeless. Yet the gargoyle had seen them grow from tottering children to serious adults, and sometimes he had seen them laid in the ground and prayed over, and buried. In only a few more years, upheaval would come to the Mission, and the quiet people with their crosses and incense would be gone.
It would be almost a hundred years later that the gargoyle was found in the river mud and restored to his home above the lavanderia, with careful hands plastering him into place. Though the water no long flows over his tongue, his open mouth and startled look still delight the people who come once more to murmur softly below the grape leaves.