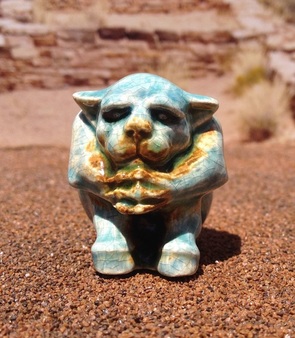 Frost hung from the gargoyle's ear tips, forming icy hairs that softened his carved features. So many frosts, so many rainstorms, so many cycles had passed since he was first carved and set into place on a high pinnacle above St. Rumbold's Cathedral. It was three hundred years since the carrillon bells were installed, and he still thought of them as the 'new bells'. Now, as he gazed ever downward to the broad avenue below, he watched with more than his usual benign attention as columns of soldiers marched past, briskly, with their black Malnois dogs at their heels. It was 1918, and faint noise in the distance was the approaching thunder of war.

Few people bothered to glance upward at the Cathedral spires, all of their lives the shadow of the Tower and its multitude of grotesques had been there, simply existing, a feature as natural as a mountain or an ancient tree. Curiosity was long forgotten, and the meticulous craftsmanship of ancestral stone carvers was left to the caresses of the wind and the slow scouring of the rain. Unblinking, the gargoyle pondered the city, and the city ignored the gargoyle.
One tiny snowflake, intricate and perfect, landed lightly on the gargoyle's head, and then another. The snow began in earnest, and by the time the sun had set, the city below was soft and hazy. Faint traceries of smoke rose from brick chimneys as fires were lit and the occupants settled in to their meager meals. The scent of rabbit stewed in prunes, and of sausages crisped on grilles, drifted through the briefly opened doors and dissipated in small gusts of wind.
War meant nothing to the granite creature, it was simply another inexplicable thing that the people did, in their brief and scurrying lives. From his perch, he could see the fields stretching to the horizon, and sometimes, briefly, he glimpsed the distant ships that no longer had white billowing sails, though he remembered them. In the spring, red poppies sprung up here and there, bright splashes like drops of blood.
Yes, in the spring there would be red poppies, in the fields of Flanders.
Story and photo by Joanie Berkwitz.