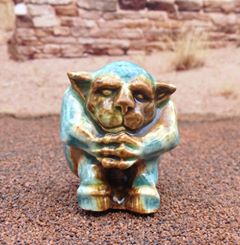 As darkness falls in the town of Montmorency, a sullen grey sky fills with clouds of birds, coming to roost in the bare trees. Above the trees, above the dull slate roofs and red chimney pots, even above the thin wisps of smoke trailing from those chimneys, sits a contemplative gargoyle. His head and shoulders, exposed to the elements, have lost the marks of his maker's chisel, but even the most delicate lines of tool and hesitation, the tapping conversation of the sculptor and the creation, remain in the deep crevasses of his folded hands and bent legs. It's 1762, and Louis XV “The Beloved” is King of France. Although France had been at war for decades, and the people wearied of it, up in his spires the gargoyle knows nothing of it. He is, however, a keen eyed observer of those tiny people below him, and he has once again spotted one man in a tattered green coat that appears daily.

Pigeons are stupid birds. They exist only to eat and reproduce. Their thoughts, or what pass as thoughts, are as individual notes in the chorus of the flock. A solitary pigeon is either lost or sick. So when the gargoyle spots the green coated man below, so too do the pigeons, and they fly as if all are controlled by one, down to coo and fluff at his feet. He throws them bread crumbs, directly out of his pockets, from bread that was baked a week ago in the ovens of Paris, and found its way to Montmorency up the winding cobbled street, in the baskets of a very hairy mule. When the man received the bread, it was slightly moldy and very stale, and he scraped the mold off with the same knife that he sharpened his quill with, and cut the leather to mend his shoes. He ate what he could pretend was still edible, and the rest he kept for the pigeons, the only creatures who cared whether he lived or died.
Watching the man and the pigeons, his throwing gesture and the accompanying wave of pigeon reactions, the gargoyle has no idea that he will not see the man again, when the sun rises. As the darkness becomes too great, and the pigeons too restless for their roosts, the man turns to go. He shrugs his coat closer to his thin neck, and glances toward the church spires. He never looks high enough to see the gargoyle, never sees the unblinking eyes gazing at him. He isn't really looking at anything, even if he chanced to look higher. His mind is filled with fear. His new book, “Emile”, is being discussed everywhere, from the splendid and well lit dining halls of the elite, to the smoky, smelly boarding rooms of the poor. Some have sympathy for his ideas, some have scorn. On the table of the local judge sits a paper, to be cried around the town tomorrow, condemning him and his book. On it, his name, Jean-Jacque Rosseau, and by the time the town crier speaks it aloud tomorrow, he will be gone.
Story and photo by Joanie Berkwitz.