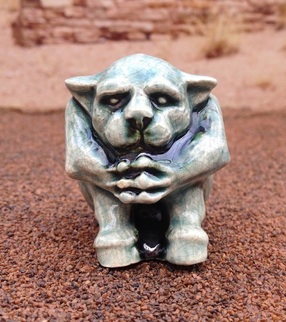 It had been dark for a very long time, though time as a measurement was unknown to the gargoyle. His contemplation of the darkness was exactly the same as his contemplation of the sunlit landscapes that once spread out below him, before he was rudely, and without explanation, removed from his rooftop home. On that day, after four hundred years of disregard, workmen had chipped away the grout holding him in his niche, and pulled him out, wiping from his face the lichen and dust that covered him. They handed him from one to another, joking in their low way, and one workman carried him down the scaffolding, wrapped in a dirty cloth shroud that smelled of fish and tar.

When he was shoved into the wooden crate and covered with sawdust, feeling the thuds of the nails being hammered home, the darkness had swallowed his world. The experience of such profound darkness was so remote from his beginning, in the incandescent fires of a porcelain kiln, stoked by leather bellows. The sculptor and apprentice that created him had long since been buried, and their children had been buried, and their homes had fallen to ruin, the fields where they once stood were now underneath the immaculate gardens that he had recently kept watch over. Generations of people had come and gone, occupied by their fleeting concerns, and he thought that they had forgotten his existence entirely. Until this wrenching out from his niche, and suffocation in sawdust.
Voices, and movement, and the sawdust was brushed from his passive face by a manicured hand. Though spoken words meant nothing to the gargoyle, who had heard less than ten sentences in four centuries, the tones of amusement and astonishment spoken by the men who now held him, told him that they were pleased. A careful wipe of an immaculate and faintly flower scented cloth, and a reverential holding up of the gargoyle toward the light, and the tones of conversation turned to admiration. Given a sort of solid animation by the skilled hands of the ancient craftsman, whose very name was lost to time, nevertheless the gargoyle's form and glaze spoke to the souls of the museum curator and his assistants, the first to see the gargoyle up close in a very long time.
Surrounding the room, shelves and cases held precious pieces of ceramic and porcelain, from the farthest corners of the World. Squat, disapproving Mayan anthropomorphs faces off gently draped peasants herding splotchy cows, above a row of Commedia Del'arte figures, their Harlequin costumes set off with touches pure gold. The Italian figures bowed and curtseyed to each other, their exaggerated gestures forever frozen by the fires that brought them to a red orange maturity. On a table in the center of the beautifully proportioned room, dozens of Ushabti stood at attention, no longer serving the Egyptian nobility that they once guarded, in the dark, hot underground tombs in the Valley of Kings. An astonishing collection, these culminations of the potter's art, but ripped from the context that gave them meaning and complexity. The displays were lovingly arranged, but like butterflies pierced in the height of their brief lives, while they gained safety and admiration, they lost the spark of purpose.
In his new niche, without wind to caress his face or rain to etch his glaze, the gargoyle sat, impassive, and a tiny piece of lichen that had nestled in the corner of his mouth despite all cleaning, slowly dried and crumbled to dust.