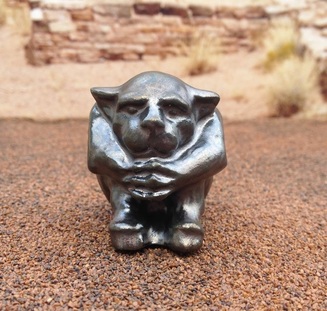 In the dark workshop, lit only by the orange glow around the edges of the furnace door, the craftsman sneezed, and sneezed again. Acrid smoke, lingering in the high corners of the room, made his head ache and his lungs burn as if he were the casting instead of the caster. After fifteen years, his lungs were as dark as the patina on the bronzes that his molds had cast, and nearly as impermeable. Though it brought him a comfortable life in other ways, enough food during famine and plenty of coal to burn during winter, his craft was slowly killing him.

He had started as a very young boy, dragging loads of dusty coal, learning to stoke the fires for his Master, to maintain it at just the perfect glow of orange to keep the molten bronze fluid. As the years of his apprenticeship passed, his arms grew massive and his shoulders hunched, and his eyes were always red and achy from the corrosion of the smoke. Outside, rain or snow or sunshine made no difference to him, as his workshop was always unrelentingly hot, like a tiny chamber of anger in an otherwise quiet heart.
He moved away from the mold, as the bronze darkened and congealed, and began to harden. He didn't have to wait for it to become cool enough to remove, it would be many hours before it could be touched. In his mind, he could see the lion like features of the gargoyle that was now trapped, cooling, and patiently waiting for release. It was destined for the Imperial Palace, another treasure among countless thousands of treasures, created by a vast army of craftsman that supplied the Court with their trinkets and monuments. It may, indeed, never be displayed, he had heard stories of works of incredible art, the pinnacle of an artist's skill and care, remaining in their carefully built wooden boxes, never even opened, gathering dust in a storage room. Like moths, those workmen rose to the light of Imperial regard, and then fell and died, a victim of their own materials. He hoped that this one, this bronze Lion, would not share that fate.
As he turned for one last look at the mold, with its hidden gargoyle, he thought once more of the Imperial Palace, and longed to see behind it walls. Forbidden, sacrosanct to all but a few, he could not even form a vision of what it must be like, so remote was it from his experiences. Then he quietly opened the door, stepped outside, and walked away.